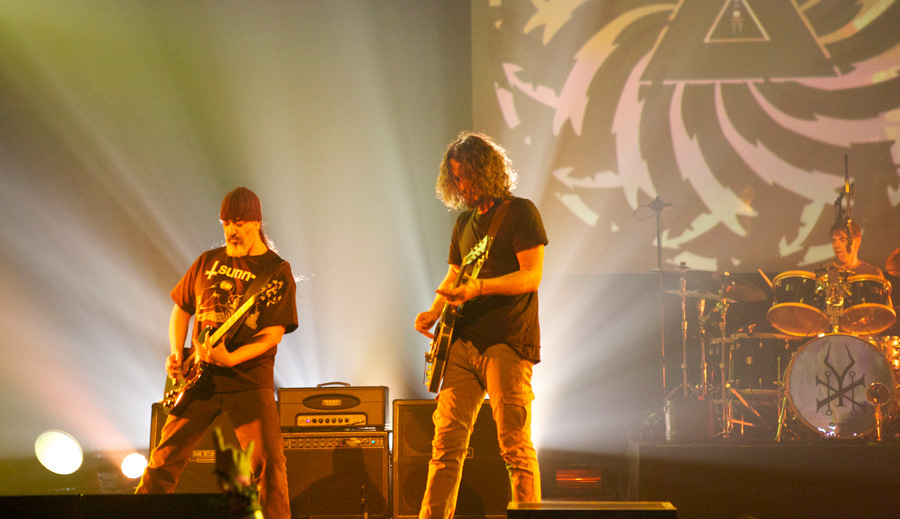 With their originally-scheduled two-night stand at the Wiltern Theatre selling out quickly, Soundgarden decided to add a third date – tickets for which went just as fast.

And on Friday night, the Seattle icons roared back into Los Angeles with a stellar two-and-a-half hour set that not only highlighted their latest album King Animal, but also touched on many of their groundbreaking smashes from past works.

The Wiltern was buzzing from the start.

As fans filed into the lobby high-fiving at the chance to once again see the grunge pioneers, music from the era played over the PA system. Candlebox, Alice in Chains, Ugly Kid Joe and Soundgarden themselves warmed up the crowd for what was to come.

Kim Thayil’s scorching fretwork on the opener “Searching with My Good Eye Closed” announced the band’s arrival on stage, with drummer Matt Cameron’s kit thunderously holding down the back end along with Ben Shepherd’s low-strung bass.

Cutting through it all, of course, was Chris Cornell’s theatric vocals. It seems that no matter where Cornell is playing – whether a stadium or theater – his pipes are perfectly suited.  This is a guy that could seemingly hit his signature howl forever.

Soundgarden didn’t let up the entire show.  “Attrition” from King Animal might have been the most metal song of the show, and that was early.  So was the ethereal “Let Me Drown” and the fan-favorite “Spoonman” off 1994’s Superunknown.

The intensity continued with “Taree,” a psychedelic dirge-rocker that highlights Thayil’s skills while images of a snow-ridden landscape were projected on the screen behind the band.

The MTV hit “My Wave” brought forth some storytelling. Cornell smiled when he told the audience that the song was “more about staying away from everything that’s mine because it’s mine,” but “it was in a surf movie, so now it’s just a surf song.”

“Been Away Too Long,” Animal’s lead single, came soon after. The refrain – “No one knows me, no one saves me, no one loves or hates me, I’ve been away for too long” – might be a call-out to fans who have been clamoring for new Soundgarden tunes (King Animal is the band’s first full-length in 15 years).

But judging from the crowd reaction, the older stuff was welcome, too.

“Pretty Noose” was a definite highlight, with Thayil’s ominous beginning riff to Cornell’s pained and melodic refrain. And the radio-friendly “Burden in My Hand” had the standing-room-only audience swirling, as a gold spotlight shone on Cornell during the song’s unforgettable intro.  Cornell also grabbed an acoustic guitar for King Animal’s “Black Saturday,” which would fit perfectly in an episode of MTV Unplugged and was accompanied by images of spring on the backdrop.

One humorous point of the night was when Cornell called a young boy named Charlie on stage because it was his birthday. Cornell offered Charlie the chance to watch from the stage, but the young man declined when he was too star-struck for words.

The biggest surprise of the evening was “New Damage” from 1992’s Badmotorfinger. As Cornell explained, it was the first time the band had played it live in 15 years, but to this observer, the emotion that was there when the song was first written shone through.

A big reaction was given to “Live to Rise,” which landed on the soundtrack of the Avengers movie, while the classic “Like Suicide” was one of the final blockbusters performed and left fans clamoring for more.

Luckily, Soundgarden came back for a massive encore. “Outshined,” “Rusty Cage,” “Dusty” and “Slaves and Bulldozers” nearly blew the roof off the Wiltern.

The quartet kept the reverb going as they walked off the stage one-by-one.  As the capacity crowd set off into the night, the sounds of the early-1990’s grunge movement were alive and well.

Soundgarden is still one of the best to carry that banner.