Playing in front of a large audience from the Lake Shore Stage at Lollapalooza on Saturday night, the Lumineers made every attempt to bring fans closer to the action.

But frontman Wesley Schultz went several steps further — several steps into the crowd.   In the middle of the Lumineers’ set, Schultz parted the seas and marched several yards into the mass of humanity and stood on a chair with a microphone stand to perform two bonus tracks that will come off the upcoming deluxe release of their self-titled debut album (Aug. 20). 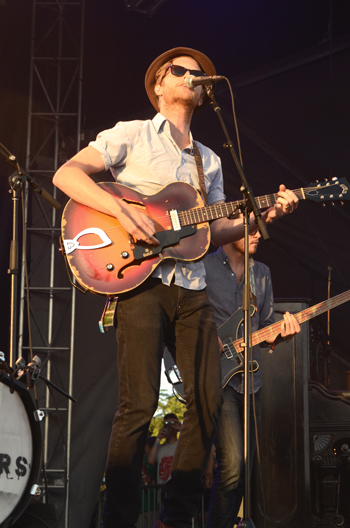 After he strummed through “Darlene,” which actually featured percussionist Jeremiah Fraites on a xylophone solo, and “Eloise,” Schultz made his way back up to the stage seemingly unscathed.

Those were hardly the only high spots of the show, however.

The Lumineers came out of the gates strong, playing the ubiquitous “Hey Ho” a few moments into their setlist.  Aided by the vocals of multi-instrumentalist Neyla Pekarek, “Hey Ho” had the entire crowd singing along, as did the summer anthem “Stubborn Love.”

As the sun went down in Chicago, the Lumineers verbally expressed their gratitude for those who gathered to watch them play.  But it was really obvious by the way they went about pulling everyone they could into their performance. Band of Horses Rev Up Outside Lands