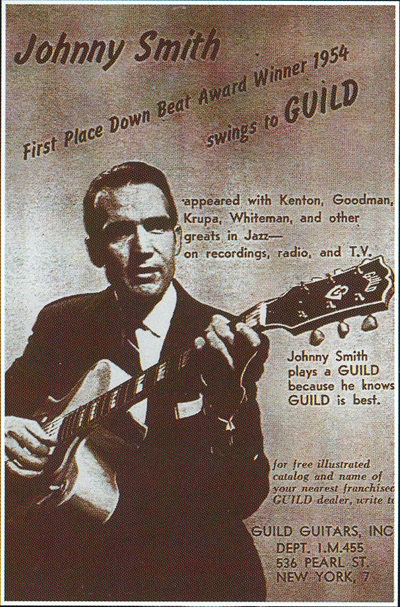 Guild is saddened to note the passing of jazz guitar great Johnny Smith.

A master of composition, arrangement and technique, Smith is best known for his Grammy-winning 1952 cover of “Moonlight in Vermont” with tenor sax great Stan Getz. Smith also wrote instrumental guitar classic “Walk, Don’t Run” (1954), which became a quintessential surf-rock standard when the Ventures recorded it in 1959. In addition to Getz, he accompanied artists including Benny Goodman, Bing Crosby, Count Basie, Stan Kenton and many others.

The Washington Post noted that the “sumptuous melodic style, understated precision and remarkable consistency of Mr. Smith’s playing over the decades brought him countless admirers at the highest levels of his craft.”

Born June 25, 1922, in Birmingham, Ala., Smith taught himself guitar during childhood and had turned pro by his early teens during the Depression. He played cornet in the Army Air Forces band during World War II, after which he established himself in New York as one of the city’s top guitarists. Smith played with the NBC radio studio orchestra under conductor Arturo Toscanini. Onstage, he performed difficult compositions by Arnold Schoenberg with conductor Dimitri Mitropoulos, and he appeared often at New York jazz nightclub Birdland.

Mainstream success came with 1952 album Moonlight in Vermont and its title track, which was Smith’s breakthrough hit ranked among the top-selling jazz singles of the period.

Smith left New York at the height of his career, however, after the 1958 death of second wife Ann Westerstrom during childbirth. He decided to raise his daughter in Colorado Springs, where he had family. He opened a music store and taught guitar there (Bill Frisell was one of his students), aided at times by royalties from “Walk, Don’t Run.”

The Smithsonian Institution bestowed its James Smithson Bicentennial Medal on Smith in 1998 for his contributions to American culture.

Smith occupies a special place in Guild history for his 1955 guitar design that in essence made him the company’s first signature artist. Smith worked with Guild founder Alfred Dronge on the resulting guitar, called the Johnny Smith Award model. Decades later, Smith once again lent his endorsement to Guild for its handmade Johnny Smith Award by Benedetto guitar of 2002-2005.