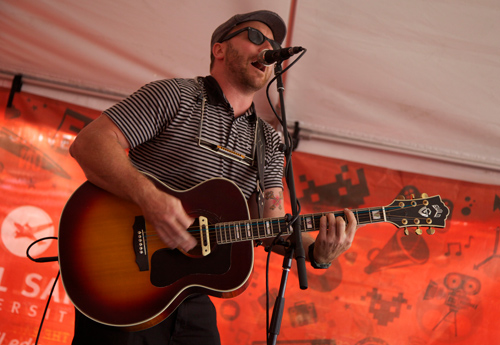 One oft-overlooked gem of the Vans Warped Tour is the “Acoustic Basement,” an area where artists can unplug and fans can unwind.

In its second year of existence, the Acoustic Basement is produced by Brian Marquis, the former frontman of Boston post-hardcore band Therefore I Am.

Performing in front of a mixed-age crowd — from teens to the middle aged, Marquis’s brand of earnest rock and meaningful lyrics was a hit, especially on “’84 Rookie Card,” which was written in honor of a friend who was killed in a bicycle accident.

Marquis also pulled out a bluesy number aptly titled “They Used to Call It the Blues.”

On a day when metal and hardcore acts compose much of the lineup, the Marquis-helmer Acoustic Basement is a notable scene to visit.