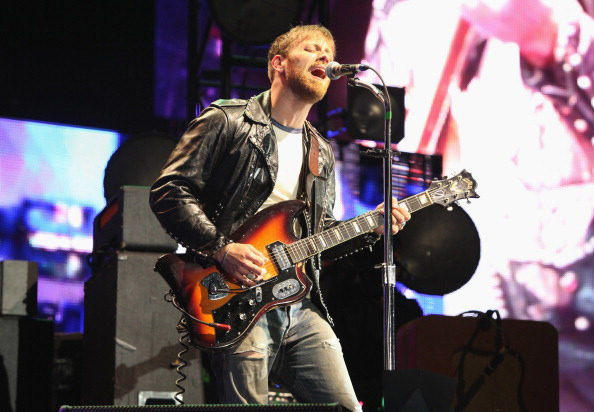 The Black Keys played Coachella’s main stage  at the Indio, Calif., fairgrounds a year ago, but not as headliners. Judging from Friday night’s bombastic performance, they’re very comfortable with that top billing.

Dan Auerbach and Patrick Carney unleashed the lightning on a massive crowd that was threatened with rain all day. The Ohio-bred duo filled the skies with their gritty blues rock, using touring musicians Gus Seyffert and John Wood to add keyboard, bass and guitars to some of the material off their latest, El Camino.

Auerbach and Carney did perform a few early songs as they were originally seen, just the two of them.

This group included “Thickfreakness,” “I’ll Be Your Man” and “Your Touch.”

But oooooh, did those El Camino tracks smoke. Auerbach is a wizard on the guitar, making it wail, howl, scream, or growl – and those are different sounds.

Carney looms over the drums like a giant spider, pounding away so much that he had to remove his glasses during a particularly rambunctious “Gold on the Ceiling.”

The Black Keys closed with somewhat of a surprise.

With “Lonely Boy” and “Everlasting Light” from El Camino nearing the end of the proceedings, Auerbach said he had one more left.

It was a particularly dirty “I Got Mine,” the second single from their 2008 record, Attack % Release.

Building to a glorious crescendo, the Black Keys certainly did get theirs, and the audience did too.